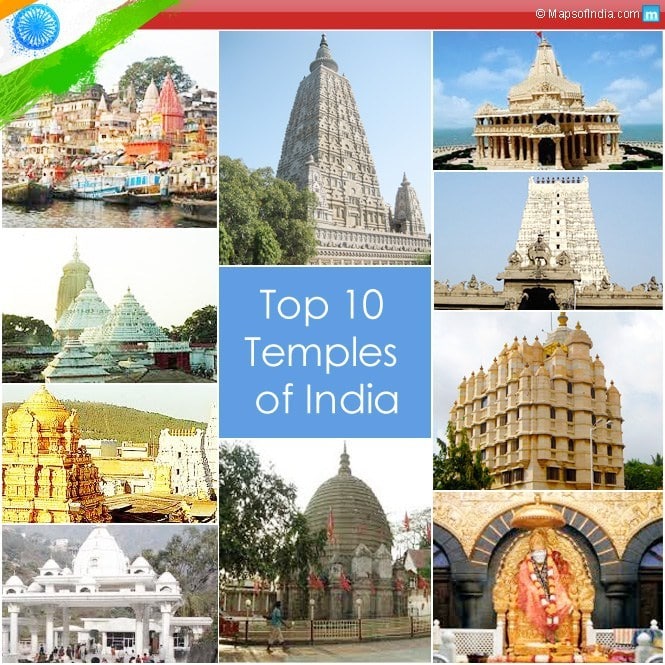 India is famous for different cultures, peoples, places, religion, festivals, and so on. India is also renowned for pilgrims. Several temples are situated in different states. Some of them are very famous due to the culture, architecture, ritual, worship, etc. Some of the pilgrims are transformed into a tourist place. The famous temples in India are explaining below.

It is one of the famous Shiva temples in India and is located at Varanasi, Uttar Pradesh. Varanasi is otherwise called Kashi hence the temple is known as Kashi Viswanath Temple. This temple was established by Ahilyabai in 1780, and it is near to the holy river Ganga. People believed that visit to the Shiva temple to attain Moksha( Liberate from the soul). Several great and holy men have visited Kashi. A visit to Kashi will equal to that of visiting the other 11 Jyotirlinga temple.

This Buddist temple is considered as a World Heritage site by UNESCO and is located at the place in Bihar where Buddha had attained enlightenment. It is the ancient brick temple in India, and its architectural design is lovely. Several people visit here from all over the world. The Bodhi tree and structural shapes on the pillars can bring the attention of visitors.

Meenakshi Amman temple is located near to the bank of Vaigai river in Madurai, Tamilnadu. It is otherwise called as Meenakshi Sundaresha temple, and it is the ancient historical Hindu temple. It is dedicated to Goddess Parvathi and her husband, Lord Shiva. The architectural design is very wondering and attractive, and there is a Golden Lotus tank. Usually, people have gone to this tank before entering the temple. The temple has a big hall, and it contains 985 pillars, and its design is unique and beautiful.

It is otherwise called Sri Harmandir Sahib or Darbar Sahib, and it is the famous pilgrim centre for Sikhs, and it is located at Amritsar, Punjab. The main attraction is the four doors in the temple and it open in four directions and it indicates that anybody can enter into the temple from anywhere. Everyone will be attracted by this architectural design of this temple.

It is one of the famous temple dedicated to Lord Vishnu and is located at Thiruvananthapuram, Kerala. The architectural design includes both Kerala and Dravidian style. Only Hindus have the permission for entering the temple, and there is a dress code for both men and women. The 100 feet Gopuram is the main attractive feature.

Dwarkadish Temple, Gujarat
Dwardakish Temple
Dwarkadish Temple
The Jagat Mandir is dedicated to Hindu God Krishna, he was the king of Dwarka hence this temple called as Dwarkadish and is located at Dwarka, Gujarat. The entry and exit doors are known as Swarg Dwar(way to heaven) and Moksha Dwar(way to liberation) respectively. This 5-story structure has 72 pillars and is located on the bank of river Gomti. There are 56 steps for entering into the Sward Dwar.

Tirupati Balaji Temple, Andhra Pradesh
Tirupati Balaji Temple is otherwise known as Venkateswara Temple and is located at Tirumala, Andra Pradesh. The temple is dedicated to Lord Venkateswara(known as Balaji) who is another form of Lord Vishnu. It is the second wealthiest pilgrim site, and people provide money and gold for this temple. This temple celebrates the most famous festival Brahmotsavam. The temple offers a particular kind of Ladoos(sweet) for the visitors, and it is unique with the taste. Removal of hair is the main religious ritual in this temple.

This famous Hindu temple is dedicated to Lord Ayyappa(son of Lord Vishnu and Shiva) and is located near to the Periyar Tiger reserve in the western ghats of Pathanamthitta, Kerala. In the age of menstrual stage, women are not allowed here. The opening times are 41 days in November and December, Vishu, Onam, first six days in every Malayalam month, and Makara Sankranthi( a day in January). There are eighteen steps for entering into the temple.

Siddhivinayaka temple is established in the year of 1801 and is dedicated to Lord Ganesha and is located at Mumbai, Maharashtra. The inner wooden doors are carved with Ashtavinayaka( eight impressions of Lord Ganesha). Can see a huge number of visitors on Tuesday.